Smart ArM: Pushing the limits of the human body

Smart ArM: Pushing the limits of the human body

Home
In view of the Cybathlon 2020, a unique international competition for competitors with disabilities who use bionic assistive technologies, a team of French researchers from the Institute of Intelligent Systems and Robotics (ISIR) in Paris has developed the "Smart ArM". An arm prosthesis designed for transhumeral amputees, i.e. above the elbow. The result of several years of research, the design of this prosthesis represented a real challenge as it involved creating a prosthetic elbow. This article looks back at this technological feat and human adventure.

Due to the Covid-19 pandemic, the Cybathlon 2020 will take place on November 13 – 14, 2020 – globally and in a new format, at the teams’ home bases. They will set up their infrastructure for the competition and film their races. From Zurich, the competitions will be broadcast through a new platform in a unique live program. 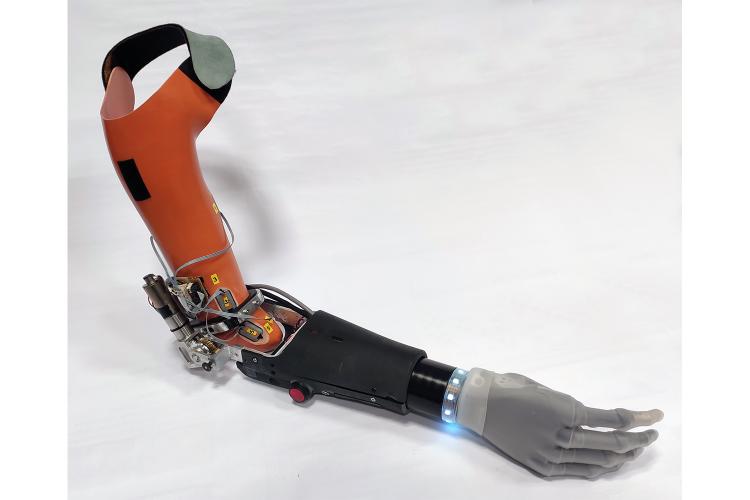 An arm prosthesis designed for transhumeral amputees, i.e. above the elbow

An ambitious project, to meet the fitting needs of a particular disability

Less common than forearm or hand amputation, arm amputation has remained relatively unstudied in research for a long time. It is referred to as above elbow amputation, or total forearm agenesis, which is an absence since birth. Even though this impairment mainly concerns young people who wish to be fitted with a prosthesis, there are currently few or no suitable prosthetic solutions available. Faced with this observation, a team of researchers from the Institute of Intelligent Systems and Robotics (ISIR) launched a research project in 2014. Grouped within the AGATHE team (Assistance au Geste et Applications thérapeutiques), these researchers have obtained promising results in upper limb prostheses. "After attending the first edition of the Cybathlon in 2016 as spectators, we wanted to set up a team to promote our vision and our innovations," explains Nathanaël Jarrassé, ISIR research officer and manager of the Smart ArM project, who is passionate about optimizing the human body.

Now they had to find a pilot. After several unsuccessful searches, it was after a discussion between a collaborator of maxon, a partner of the Cybathlon and a supplier of engines for the ISIR, that the ideal candidate was found. The applicant is Christophe Huchet, a former manager of Parisian restaurants, who now coaches SME business managers. Born with an agenesis of the right forearm, he also had an impressive swimming career behind him, as a multiple champion of handisport swimming, and also in the able-bodied arena. "This project puts me back into competitive sport and the associated dynamics that I have known well in my swimming career, but this time in the service of a strong cause: helping others and advancing technology and society. It is also important for me to take part in this event which wants to change the way people with braces look at people with braces, to show the extraordinary side of the "user-prosthesis" couple and to promote this alliance of the body and technology which makes the disability "beautiful" in a way. ", explains Christophe Huchet. 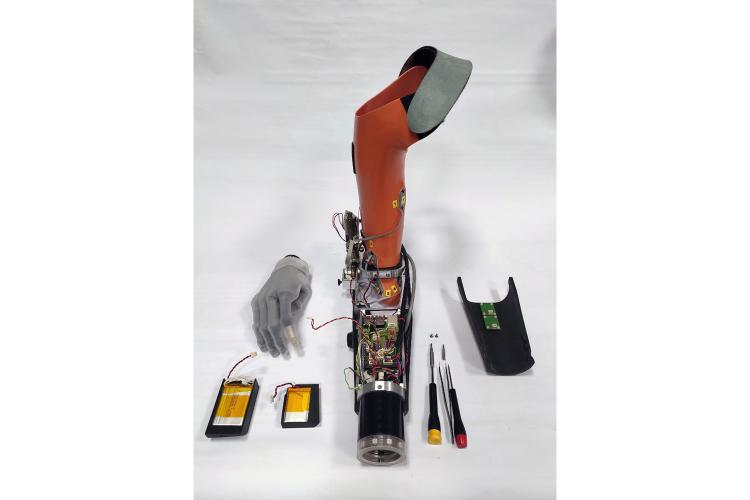 To take part in the Cybathlon, the Smart ArM team was created in 2018. It is composed of a pilot, a manager, a technical team of 11 people from the ISIR and the ISM-Univ Aix-Marseille, as well as a medical team. Such a project brings together very different fields of research, from mechatronics to computer science, including neuroscience and physiology, in order to properly interface the prosthesis with the body.

"Our participation in the Cybathlon was motivated by several objectives, including the promotion of ISIR's technological innovations, tested in the intense context of a competition. We also wanted to draw the attention of the general public to these particular disabilities, while communicating the real possibilities and limits of robotic assistive technologies," explains Nathanaël Jarrassé. The Smart ArM project highlights the major role played by humans in the "man-machine" coupling, we often tend to believe that success is due to technology alone. 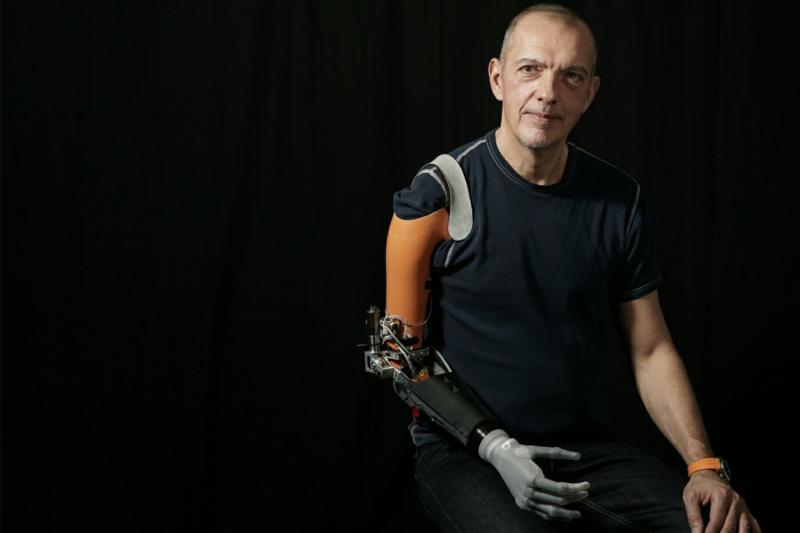 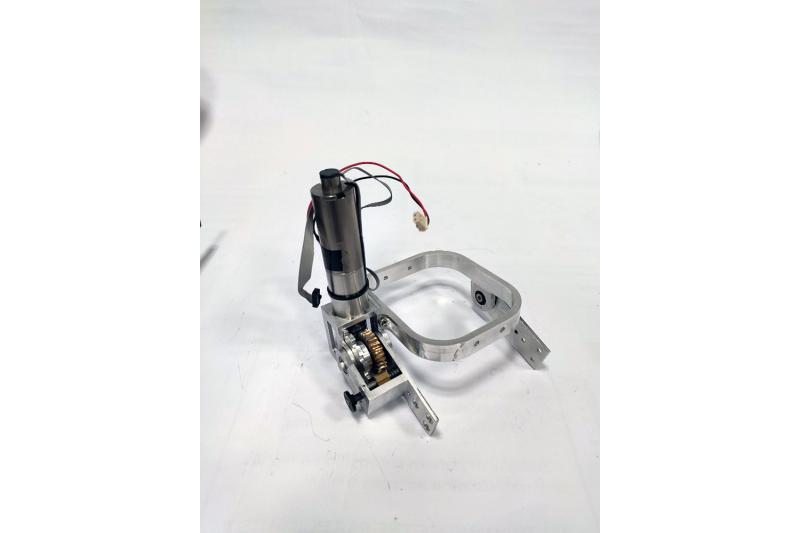 The Smart ArM team faced several difficulties to get its pilot off the ground. The biggest one consisted in developing a prosthetic elbow joint known as an "exo-skeletal", compatible with Christophe Huchet's anatomy. "Contrary to a residual limb of an arm amputee - generally shortened by the amputation act - his arm is the length of a normal arm and therefore leaves very little room for the installation of a classic endo-skeletal elbow prosthetic joint," explains Nathanaël Jarrassé. The researchers chose to offset the actuation laterally in order to place the axis of the prosthetic elbow joint in an optimal way.

But this was far from being the only challenge posed by the Smart ArM prosthesis, since it was designed to take part in the Cybathlon, the prototype had to be able to withstand extensive and intense use outside the laboratory. It was therefore necessary to design a robust and fully embedded device.

The choice of the prototype's motorization was crucial, and several parameters had to be considered. The gearmotors used on the prototype are confronted with very intense intermittent use, with a worm-wheel transmission for the elbow joint with low efficiency and high dry friction, making starting difficult. Also, to be factored in was high fluctuations in the supply voltages, and considerable shock and vibration, as the prototype would be carried by a subject who was running and walking all the time.

Six months of work was necessary to develop the exoskeletal elbow joint of the SAM prosthesis. To operate it, the team chose to use a maxon motor. "A human elbow generates approximately 15N/m of torque with speeds above 150°/s. To reproduce such characteristics with a small joint and battery operation, we were looking for an extremely high-performance, small-diameter geared motor. That's why we turned to maxon's DCX-GPX motor gearbox range," explains Nathanaël Jarrassé. Within the ISIR, it is not uncommon for maxon motors to be used to equip robotic prototypes, developed in the context of various research projects. "The advantage of maxon products is that they offer a very wide range of small-diameter actuators and market motors with perfectly identified characteristics, which allows optimal dimensioning of our devices during the preliminary design phases," adds the Smart ArM project manager. The research teams at the Sorbonne particularly appreciated the ability to build and customize the actuator online. maxon also provided technical support utilizing the expertise of its engineers. 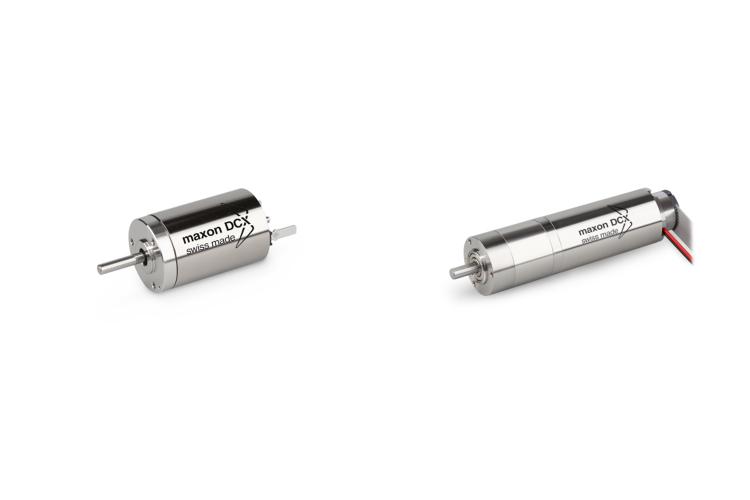 «Developing technology to help people with disabilities, despite the many challenges, is extremely stimulating and exciting»

The Smart ArM team hopes that the demonstration of its know-how during the Cybathlon 2020 will allow the transfer of the innovations developed to commercial products. It is confident that its innovative approach to prosthesis control, based on body movements, will convince manufacturers to enter into partnerships that would allow the greatest number of people to benefit from this innovation. "Developing technology to help people with disabilities, despite the many challenges, is extremely stimulating and exciting," says Nathanaël Jarrassé. Throughout the project, the Smart ArM team was committed to developing a useful, acceptable and appropriate tool for people who want to be fitted with devices. A great ambition in which maxon is proud to have been a part. 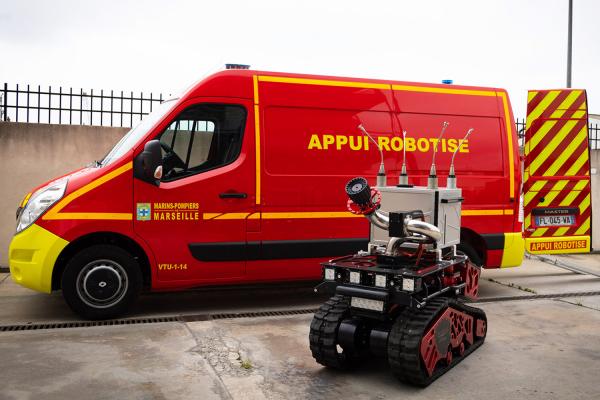 The Colossus robot on the front line against Covid-19 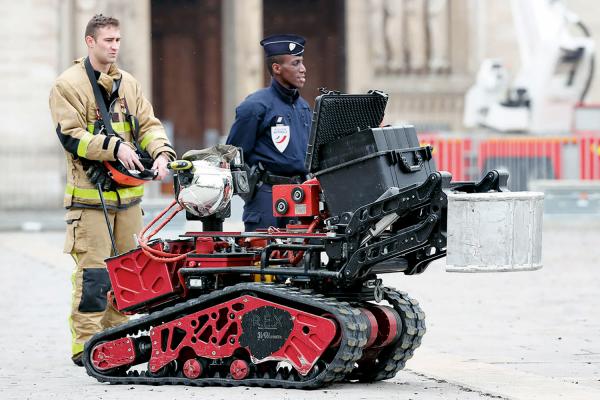 In spring 2019, the famous cathedral of Notre-Dame was damaged in a devastating fire. However, the Paris fire department prevented the complete destruction of the building – with the help of a special unit.
Read article