Customizations to standard motors for space

Customizations to standard motors for space

Home
Through a combination of standard industrial motors and creative collaboration, technology-forward customizations are made to allow high-precision, long-life motors to make it to Mars and beyond.

There is no denying that the Martian environment can be harsh and unaccommodating to systems made to operate on Earth. Mars has an atmosphere about 100 times thinner than Earth’s atmosphere, even though it is thick enough to support clouds and winds. Giant dust devils often made of the oxidized iron dust that covers Mars’ surface—which is also a permanent part of the Martian atmosphere—can blanket the planet for months during particular seasons. Temperature variations on Mars range from -125ºC (-195ºF) near the poles in winter up to 20ºC (70ºF) near the equator at midday. This all may sound like a difficult environment to adjust to, yet systems designers always go to industrial grade designs to start their search for the right components.

Since the 1600s when the telescope was invented, Mars was a curiosity. Even as telescopic capabilities increased the size of the image, Mars was not a lot larger or clearer to see curiosity about Mars grew it was evident that, to understand the red planet, it would be necessary to eventually go there. In 1964 NASA completed its first flyby where Mariner 4 took photos of the cratered surfaces of the planet, reminding scientists more of the moon than another planet. The surface also showed signs of volcanic action that had taken place at one point in its history and left behind huge canyons.

Even with the large 4.5 meter mirror on the Mount Palomar Observatory telescope, it is difficult to see details of the Martian surface. (Photos courtesy of NASA)

This information only made Mars more interesting and urged scientists forward in an effort to land on the red planet to study its surface and environment more closely. In the 1970s NASA’s Jet Propulsion Laboratory (JPL) sent the first spacecraft to successfully land on Mars. The Viking 1 Lander was used to perform single-point surface analysis in search of life. Viking 1 took high-resolution images for more than six years. It also performed soil samples using a robotic arm and specially designed biological laboratory—finding that the cold planet had volcanic soil, a dry carbon dioxide atmosphere, and evidence of ancient riverbeds and vast flooding.

After a two decade pause, in the mid 1990’s NASA was ready to move into the next step in the exploration of Mars and return with rovers. For these trips, NASA looked for standard industrial motors that would be robust enough to go to Mars. This is where the maxon Mars story officially starts. When NASA/JPL began their search, they knew that they needed a few critical specifications that would make the motor more compatible with the mission. For example, the biggest issues would be for the motors to withstand the low-pressure environment as well as shock and vibration, not only from the launching activity but from the hard landing it would have to withstand. Another concern was the extreme temperature variation cycles that the motors would have to operate through.

It wasn’t until 1997 when the first successful rover landed on Mars. The Sojourner Pathfinder incorporated ten RE 16 DC motors as a test to see how the engineering behind the semi-custom motors worked. maxon provided the high-quality, long-life industrial grade motors with very little customization for the journey. Then in January 2004, two robotic geologists named Spirit and Opportunity landed on opposite sides of Mars. They were equipped with far greater mobility than the Pathfinder rover and had scientific exploration as their primary goal. Each of these rovers was equipped with 35 maxon DC motors — RE 20 and RE 25 motors plus MR encoders. 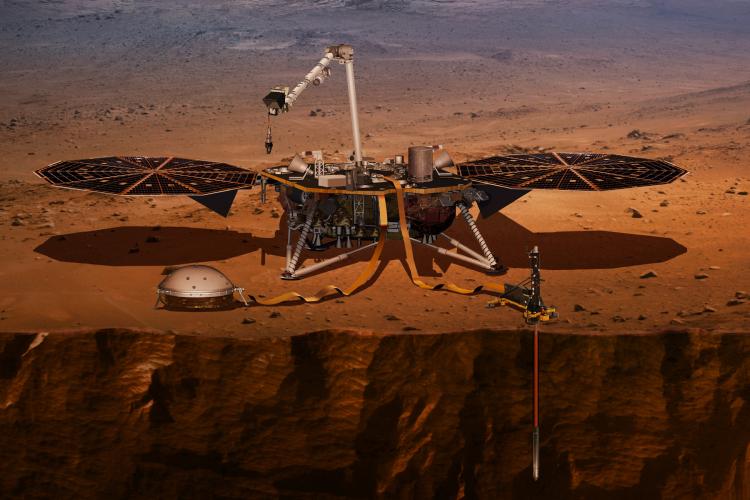 The first maxon DCX motor and planetary gearbox was used in a mechanism that used a similar method to a construction site pile driver to embed a temperature sensor deep in the ground. (Photo courtesy of NASA)

Motors were used for a variety of applications on each rover, including driving the wheels, opening the photo panels, deploying the masts and much more. After 15 years and 45 km of travel, Opportunity’s mission ended. The focus was on science. The rover was to find out if Mars once had surface water in its planetary history. A telling photo of sedimentary layers proved the point. In late November 2018, InSight landed on Mars and was the first to use maxon’s new generation of brushed DCX motor and maxon’s first gearbox on Mars.

Working with other industrial partners as well as space centers like NASA/JPL allows for experiences and expertise to be shared between all parties, which results in advances in technological capabilities at all levels. Gained knowledge not only facilitates technological advancements for semi-custom components for unique use such as space exploration missions, but also allows manufacturers to use the data to further advance the technologies used for standard industrial products. With each Mars Rover mission requiring greater flexibility and more capabilities, collaboration is key. 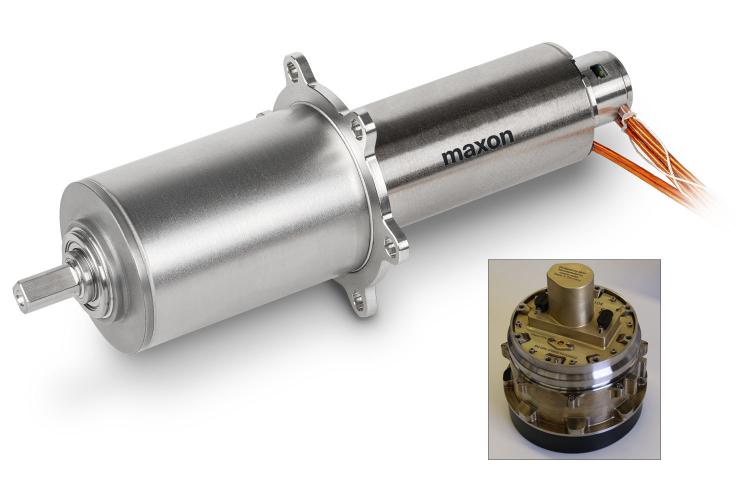 Effective partnerships allow participants to learn what worked and what didn’t, what can be tweaked for better performance, and how to find new opportunities for expanded research. For example, MDA specializes in the design of custom actuators The company incorporates maxon’s gearboxes, brakes, and encoders into their ExoMars actuator. Because very high precision was required throughout the entire manufacturing process, MDA and maxon partnered to create special assembly techniques that included a log for every single bolt (4,000 of them) and its torque value inside the unit. Out of the 70 units built, 12 will fly when the ExoMars mission launches in 2022.

Another effective partnership that helped to advance the capabilities and opportunities for new systems was with Flight Works, a company that revolutionized spacecraft propulsion using slightly modified industrial electric motors—enabling new missions to the Moon, Mars, and beyond. Flight Works is a leader in high power-density micropumps for commercial and aerospace (UAVs and other space propulsion) markets. The units are electrically driven micropumps that produce very high densities, enabled by maxon brushless industrial motors modified to the launch vibrations and shock as well as space environments. The company’s products are what has allowed the last decade’s drastic increase in CubeSat launches such as the NASA/JPL Lunar Flashlight mission.

Pump-fed propulsion allows for new space operations. Incorporating maxon EC Flat motors and EC 4-pole industrial motors, Flight Works is able to design and manufacture their 32mm propellant pumps, 22mm Hydrazine pumps, and LOX/methane cryogenic pumps. These micropumps allow pump-fed propulsion systems to operate on a wide variety of missions, including small spacecraft that use the pumps for a variety of operations, including propulsion, fluid management and spacecraft cooling, and on-orbit refueling and servicing—planned for future use in Mars return operations.

Another application where semicustom industrial motors have found their way into space include the International Berthing and Docking Mechanism (IBDM) used for docking two manned spacecraft together, such as the Dream Chaser connecting with the International Space Station. Commercial companies are also integrating maxon’s motors into their spacecraft, such as the SpaceX Cargo Dragon that uses ten EC 40 brushless DC motors to rotate the solar panels, open the navigation bay door, and lock the grappling fixture into place. 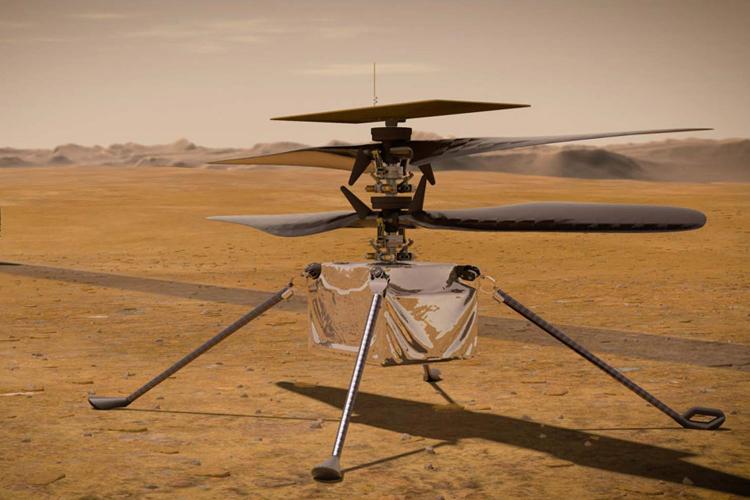 Ingenuity is a flight test and will be the first aircraft to attempt controlled flight on another planet. (Photo courtesy of NASA)

Technology matters when designs must push beyond their limits to offer greater precision while operating in harsh environments—with a no-fail requirement. Semi-custom and custom designs can provide minor changes to make huge differences in capabilities.

Now, on its way to Mars, the NASA/JPL Mission Mars 2020 (Sample Handling and Caching System), will deploy a rover similar to Curiosity but with a larger and more robust instrument package. Its goal is to collect and analyze samples, select the best ones, and drop them off on the Mars surface. Another rover will then be sent to collect the samples and bring them back to Earth at a later date. maxon brushless DC motors have been customized and are being used to handle the precious Mars samples, including the drill head chuck that takes the soil sample. The sample is then moved into a carousel on the rover, where the sample is received. A maxon motor is also used in the small robotic arm that moves the sample to stations for visual inspection, sealing, and deposition.
Like experimental missions before them, the Mission Mars 2020 payload includes something never before tried—the first helicopter, Ingenuity. As a low-cost practice run to verify if the helicopter can operate in the Martian atmosphere, this is one of the more revolutionary missions yet. Ingenuity incorporates six brushed DC motors (DCX 10S as swashplate actuators to adjust the pitch of the rotors) which is how Ingenuity is steered. Since there are two rotors being incorporated in the helicopter, there are three motors used for each rotor—a total of six motors. The motors look very close to standard industrial motors but incorporate internal modifications to handle the shock and vibration of the trip, as well as operation in the low-pressure Martian atmosphere.

As we explore our solar system for years to come, it’s a benefit to know that standard industrialized components can be incorporated into the spacecraft, rovers, and analytical equipment that will lead us there. With minor modifications, critical components such as motors and gearboxes are helping scientists to forge into the future to explore other moons and planets. Taking the lessons learned from every mission and applying similar concepts to industry in general has helped to advance motor design for the past several decades. Technology-forward is a thought process by which designers continually ask, “What more can be achieved?” When adapting to new environments requiring higher levels of capabilities, companies can be assured that not only will they stay ahead of the game, but their standard products will evolve as well.