Home
Climate change, fine dust pollution, and greening urban living spaces are key topics for the future of our society. All around the world, urban planners are looking for solutions for green architecture and infrastructure. To meet the ecological challenges, the Gartenheim housing association researched for eight years to develop an advanced vertical greening system – driven by maxon.

Green architecture and vertical gardens as a trend of the future

Urban gardening, community gardens, and green city architecture: green city spaces as a resource for humanity and the environment are in vogue. And not without reason: after all, cities are viewed as hospitable living space of the future that attracts more and more people. At the same time, people are increasingly yearning for nature and the high living standard it seems to promise. This development presents cities worldwide with the challenge of improving from the inside and finding solutions for dealing with increasing air pollution and climate change.

Globally, renowned urban planners and architects are developing concepts for greening cities. They frequently face the same main problem: chronic lack of space. This is why they develop visions of high-rise buildings with integrated forests and wooden skyscrapers to be built in major cities such as Milan, Tokyo, or Paris.

The plans include combating the bad air in the cities with lush greenery on buildings – both horizontally and vertically – to benefit the micro climate, reduce the noise of the city, and provide natural shade.

The idea of gardening on the walls of buildings originates from Professor Stanley Hart White, who patented it in 1938. The well-known artist Friedensreich Hundertwasser also used green landscaping on his houses, but he stayed in the horizontal plane. It was the French garden designer Patrick Blanc who finally made Stanley Hart White’s method world-famous with his vertical gardens.

Moss machine made in Hanover

Dr. Günter Haese, chief executive of Wohnungsgenossenschaft Gartenheim, a Hanover-based housing association, asked himself the question: how can plants be integrated into the association’s building projects in such a way that they provide added architectural and ecological value? He envisions a Hanover in which green vertical gardens enhancing the look of the city replace gray facades and simultaneously act as biological air conditioning systems. After intensive research and scientific exchange with biologists, the engineer started to develop a universal, modular vertical irrigation system for moss mats. Gartenheim makes use of low-maintenance, lush green mosses that prefer acidic environments, making them perfect for urban spaces. Additionally, the resilient spore plants offer a surprising range of impressive ecological effects: they bind fine dust, absorb acidic pollutants in the environment, increase the air humidity, and also have a cooling effect due to the water evaporation.

Time and time again, a big challenge in caring for vertical gardens proved to be the irrigation. Moss doesn’t have roots to draw the water it needs; instead, it saves the moisture in its outer sponge-like structure. Therefore, on the vertical plane, the moss can only be irrigated from the front.

Gartenheim’s “moss machine” is currently the only system that allows uniform frontal irrigation of large surfaces and thus provides the mosses with optimal living conditions even on the artificial vertical plane. This is why the British Bryological Society listed the innovation from Hanover as one of the world’s most interesting moss projects. 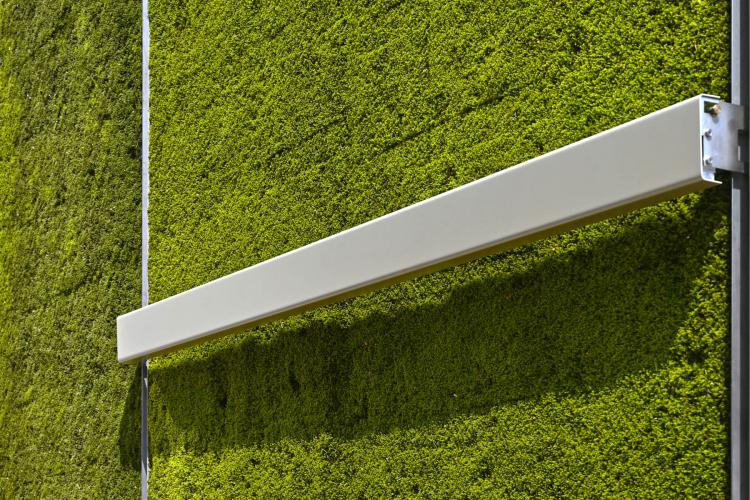 A moving sprinkler arm not only evenly moves up and down over the moss surface, but also shakes a little during the gliding motion to ensure that each and every millimeter is supplied with water.

How the principle behind the patented idea of the vertical greening system works: a moving sprinkler arm not only evenly moves up and down over the moss surface, but also shakes a little during the gliding motion to ensure that each and every millimeter is supplied with water. The excess water flows into a steel tray surrounding the moss and is recycled. This means the irrigation is optimally controlled without watering the surrounding area. Rain water is mainly used for watering the moss, efficiently closing the environmental cycle.

An oscillating jet pipe with hundreds of small holes evenly moves over the moss surface. The clever design uses approx. 180 individual components developed and made by Gartenheim, but the technical details are hidden to the eye, as the system itself is concealed behind the green surface. 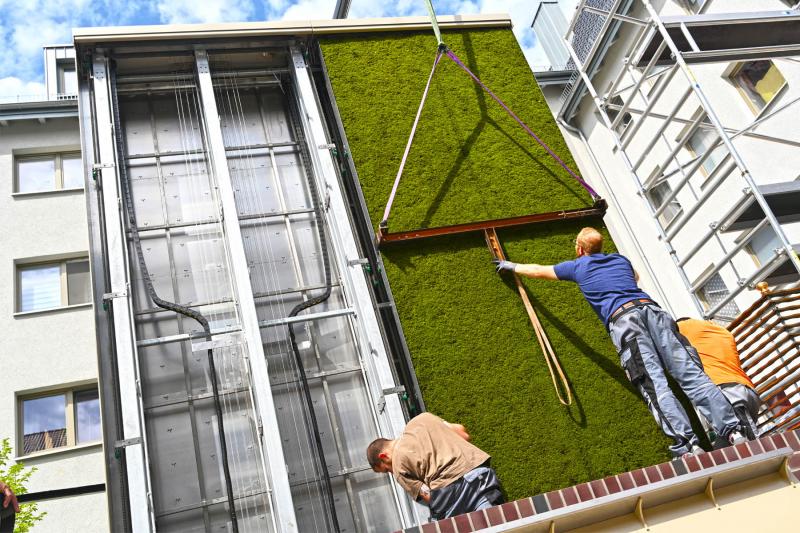 Two of the new vertical greening systems with moss machine are already in action in Hanover. Others are planned. 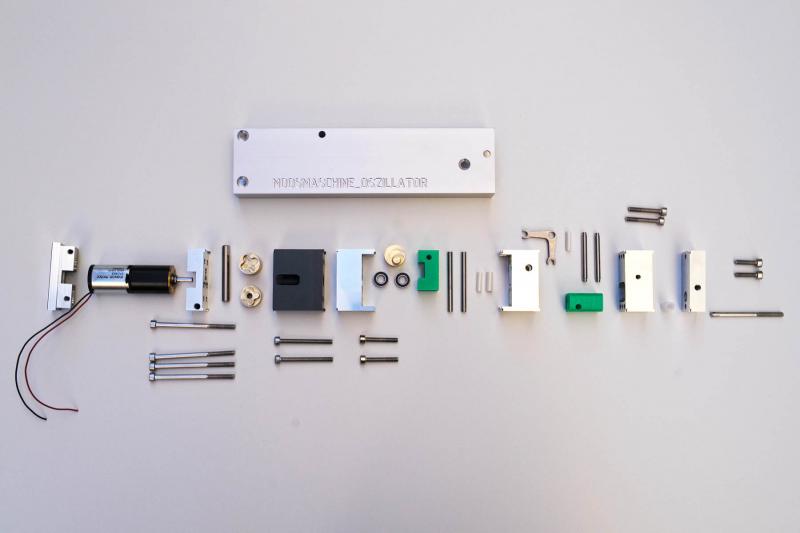 Selecting the optimal components was a challenge: in the end, the drives and ceramic axes of maxon met the high requirements and are now part of the vertical greening system.

Selecting suitable components for the irrigation system was a challenge. Not only the moss mats, but also the moss machine and all its components are constantly exposed to humidity. Therefore corrosion resistance is of the utmost importance for ensuring that the system has a long service life. Dr. Günter Haese examined many components closely and put them through a series of rigorous tests. After all, his flagship project for vertical greening systems has to be reliable and fit to meet the challenges of the future. Wear resistance, a long service life, and high hardness were also important criteria for selecting the right parts. In the end, the drives and ceramic axes of maxon, the global leading provider of high-precision drive systems, met the high requirements and are now part of the vertical greening system.

The irrigation system can be built in different sizes. Additionally, it is possible to integrate the moss walls and supply system directly into the facade of a new building, or to place it in front of a residential home as a sculpture. 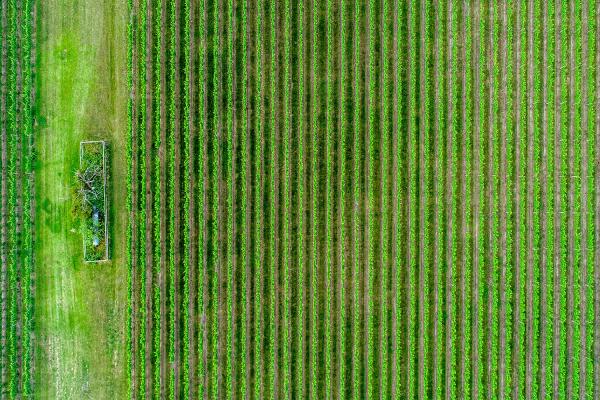 The agricultural sector is undergoing significant changes and is modernising. To take the strain off farmers, many robots are being developed to automate tasks. What specific technical characteristics should agricultural machinery manufacturers take into account to assist farmers?
Read article 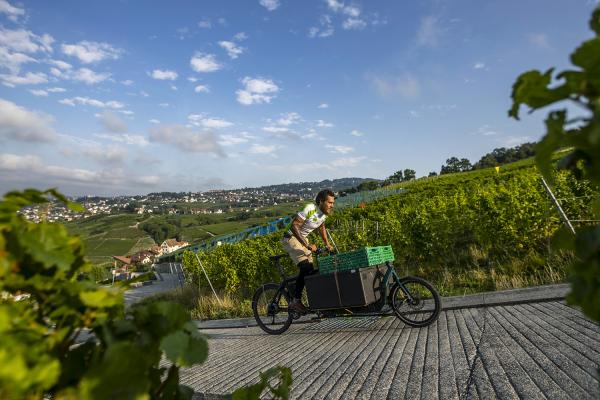 The organic express of Lausanne

The bikers of Plateforme Bio Lokal supply fresh organic vegetables to restaurants and bars – quickly and emissionfree. Even 200 kg of potatoes do not faze them.
Read article 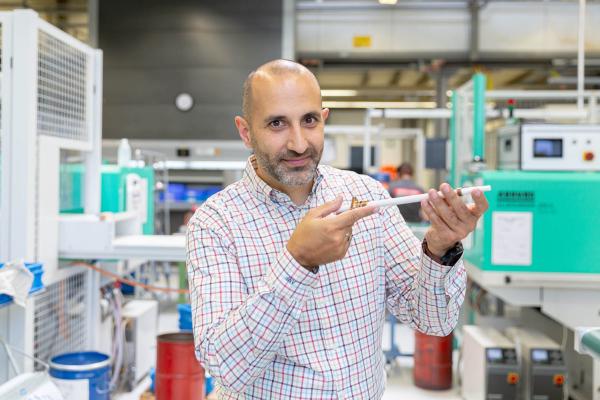 When all other materials fail

maxon has its own injection molding department for ceramics and metals. It not only produces ceramic spindles, but also special parts for watchmakers and the music industry.
Read article
Load more